Fun Facts about the Phantom of the Opera

I know it's been a while since I've posted over here, but I thought I'd pop over with some fun facts about the Phantom of the Opera. These are courtesy of The Examiner . Com
Check them out!

By 2007 the number of film adaptations of Gaston Leroux's novel amounts to 40. including shorts, cartoons, TV, films, and variants.
You can now include my version as well! *G*

In the theatre variations of the musical, the “Red Death” mask the Phantom wears during the Masquerade sequence is a full skull complete with moving jaw.
Huh. I never knew that!

The musical cannot be performed at any venue that can’t accommodate its massive chandelier.
That makes perfect sense.

The original Frod book publication of 1910 was illustrated with five paintings by André Castaigne. The paintings served as an inspiration for the 1925 film, and have appeared in many subsequent reprintings and translations.

In 1943 Universal remade its silent classic with Claude Raines.
I've seen this one and loved it.

Iron Maiden recorded a song in 1980 titled “Phantom of the Opera.”

Horror icon Dario Argento filmed an adaptation of the film in 1998 starring his daughter Asia Argento and Arachnophobia star Julian Sands. In Argento’s version, the Phantom is not disfigured at all. Instead, he is a classical romantic anti-hero with telepathic powers.

Lon Chaney put egg whites on his eyes to give them a cloudy appearance. To achieve his skull-like make-up, Lon Chaneyattached a strip of piano wire to his nostrils with spirit gum, pulled it back until he got the tilt he wanted, then attached the other end of the wire under his bald cap. According to the film’s cameraman it cut into Chaney's nose and caused a good deal of bleeding. Cheeks were built up using a combination of cotton and collodion. Ears were glued back and the rest was greasepaint shaded in the proper areas of the face.

Gregory Peck’s earliest movie memory is of being so scared of the 1925 film he asked his Grandmother to let him sleep in her bed.

Selected by the Library of Congress for preservation in the National Film Registry in 1998 as being "culturally, historically or aesthetically significant."

The Andrew Lloyd Webber musical never gives the Phantom a name, but in the novel he is referred to multiple times as Erik.

Now that's some trivia! I had no idea on a lot of those. What trivia do you know about The Phantom of the Opera? 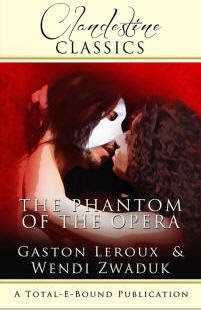 A chance sighting at the Opera, fated love, and three lives in turmoil.

One man pledges to own her, while another wants her heart. The Opera sets the stage for romance and intrigue. In the catacombs below the building lives a man rife with sorrow and passion. The Phantom. But he’s not content to live alone. He wants to possess the one woman who can set him free.

Viscount Raoul de Chagny doesn’t believe the rumours of a Ghost living below the Opera. He only has eyes for Christine, his childhood friend and first love. Together they embark on a sensual journey of discovery and fiery desire.

But she can only have one man. Will love raise her up or tear their world apart?

Teasers are so great, aren't they? I'd love to share a snippet from Phantom with you! Happy Holidays!!!

“What are you asking of me?”

“Your submission. Allow me to direct you as if I were the composer of one of your songs. Do you trust me?” Raoul smoothed a lock of her hair between his fingers. She smelt of flowers, a most intoxicating scent. Although she trembled in his arms, she met him for a kiss. Christine whimpered. Damn the blanket and the layers of fabric between them. He longed to feel her body next to his. He parted her robe and shoved the garment from her shoulders, leaving her in her nightgown. He swiped his tongue along her bottom lip and palmed her breast.

“Let me make you feel the magic.”

Christine stared at him a moment. “What do you want me to do?”

“Give me what I want. Can you do that?” He unbuttoned the top button on her nightgown. “Show me the depths of your soul.”

“I can.” She whipped her nightgown up over her head, exposing her body to him. Her rosy nipples peaked and the flush spread across her entire chest.

Raoul shrugged out of his nightshirt and tugged her back onto his lap. Skin to skin, mouth to mouth, he lost himself in her sweetness. His desire to conquer her took over. Christine slid her hands up his chest and twined them behind his head.

“Do you still wish to learn? This will not be what you expect.”

He sat back on his heels and hazarded a glance to the door to reassure himself it was locked.

“I do not wish to be interrupted.” He grabbed the chair at the small table and dragged it to the couch. “Sit.”

Christine hesitated, then moved from his lap to the edge of the bed. Raoul eased her onto her back. He crawled between her thighs. “I will pull out so I don’t leave my seed inside you, but I cannot guarantee this won’t hurt.”

She nodded, but didn’t look particularly agreeable. He braced himself on his knees and one hand. With his free hand, he stroked her cheek. “I will make you feel precious when I’m done.”