Edgar Allen Poe and a Happily-Ever-After

I'm a little behind the times here this month - there have been so many projects I've been working on, that I forget what day it was! But I want to talk to you about my new Clandestine Classic that will be out on December 27th - The Fall of the House of Usher by Edgar Allen Poe.  I have always loved Poe, and House of Usher is one of my favourite stories. I've even seen the Vincent Price film rendition many times. But there is one singular thread that runs through all of the interpretations of Poe's story that I've encountered - poor Lady Madeline is doomed to a gruesome death. Not exactly the height of romance.

In searching for something to pair with The Legend of Sleepy Hollow, it was necessary to choose a classic that would be in the horror genre. Horror, in and of itself, isn't the most romantic of genres - although no one can deny the romance of Dracula or Phantom of the Opera. Even Sleepy Hollow had the rivalry of two men over the fair Katrina at the heart of the story. I'll admit, I kept returning to Poe as an option - not because of his love stories - but because I love his prose so much.

My first choice of Poe's was always House of Usher, but it seemed an insurmountable task. The only female named is the Lady Madeline, and she is only in the story twice - and never speaks or is spoken to. I tried to see if there were other stories by Poe that would better prospects, but in my opinion, there weren't. After reading and re-reading it over and over, I finally figured out how to make Lady Madeline a more central character, and to bring about a romance between her and the visitor to Usher. Since I couldn't change any of the original prose, it became necessary to interject my words in between so that it was plausible that Lady Madeline doesn't die horribly. Here is a small excerpt of one of her early encounters with her brother's visitor, Edward. 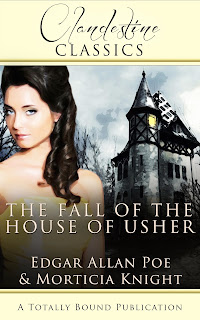 I went past the doorway on my right where I had sworn I had heard a scraping noise, and paused. I was tempted to knock on the door, to see if my guess was correct about the Lady Madeline. After Roderick’s little burst of temper that morning however, I found myself suddenly cautious. I could not seem to find the normally brazen courage that would allow me to put my theory to the test. My own trepidation about being caught where I should not be, then being put out of the house, made me unusually timid.

“Fool,” I mumbled to myself, and determined I should like to see the space below the stairs first before I made any rash decisions. I walked about a dozen paces to the railing above the ballroom and looked down. It was indeed a grand room, and must have been spectacular at one time long ago, lit by a thousand candles, sparkling lights and festive garlands reflecting back from the solid wall of mirrors on one end. But now it lay in disrepair—the cracks in the mirrors left unfixed, the marble floor scuffed and chipped, and the enormous chandelier dulled by a thick layer of dust. I focused instead on the terrace doors at one end that appeared as though they would open onto a courtyard. As I had suspected, this explained the light I had seen.

I jumped and turned around swiftly at the creak of a door. Frozen, I stared in horror at the very doorway I had stood in front of just moments before. The door was opened , yet no one came forth. I thought to myself what a silly coward I had become since my arrival at the gloomy mansion, and resolved that I must have the frights due to the atmosphere the house exuded.

Gathering myself, I slowly advanced towards the room where I imagined I had heard a scraping noise the previous night. I startled once more, but this time I was rewarded for my fears. It was the lovely Madeline herself, timidly peeking out from the archway to her quarters. She caught my gaze and covered her mouth with her delicate fingers. I fear I had caught her by surprise as well.

“I thought I heard a voice,” she said softly.

“My dearest lady,” I said, bowing before her. As I rose, I continued, “Please forgive me if I have alarmed you. I am Edward, Roderick’s boyhood chum, and he invited me to stay here with him. I…”

I stopped myself from mentioning that I had seen her that first night, concerned that she either would not remember she had done that, or would be mortified that I had witnessed her in such a state.

“Well,” I continued, “I was actually just in the midst of exploring whilst the valet was occupied on an errand in town, and Roderick was napping…”

“You must come in at once,” she said in hushed tones.
I will be back next month for a spicier excerpt - see you then!

Email ThisBlogThis!Share to TwitterShare to FacebookShare to Pinterest
Labels: Edgar Allen Poe, excerpt, Morticia Knight, Poe, The Fall of the House of Usher