Hot for the Holidays with Lynne Connolly


Welcome to the Clandestine Classics Hot for the Holidays celebration!

Total-e-bound, with great wisdom and savvy, has chosen to "open the bedroom door" on several of the established classics with which we are all familiar. These romances have had a lot of spice added to them and we hope you enjoy the new flavour.

Please be sure to leave a comment for a chance to win a copy of TOM JONES, along with being entered to win a $50 TEB gift certificate! Wouldn't that be an awesome Christmas gift for yourself?

Have you ever read one of the classics and wondered was happened behind those doors, curtains, trees? Yeah, us too. We've brought you the likes of JANE EYRE, PHANTOM OF THE OPERA, NORTHANGER ALLEY, and others with those thrilling bits included. Well, get your favourite holiday drink and kick back to enjoy a taste of our Clandestine Classics.

Of course today I'm going to talk about my own...TOM JONES. 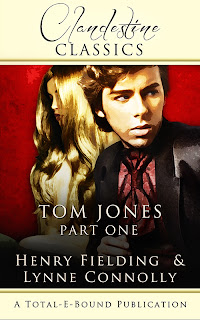 I succumbed. For years I’ve been reading eighteenth century novels with huge enjoyment. I saw the wonderful film of TOM JONES and not for the first time, wondered what exactly happened behind those closed doors and in the fields, and, well, anywhere else Tom decided to pause his adventures for a happy interlude. The book is incredibly bawdy, and if it hadn't been for the scandal surrounding FANNY HILL, released the same year as TOM JONES to great controversy and even greater sales, who knows? It might have been as open-door as Cleland’s book!
The author, Henry Fielding, was an incredible man. Not only did he write some of the finest books in the English language, he began the movement for a civilian police force and in his capacity as magistrate at Bow Street founded the Bow Street Runners.
His masterpiece is as full of life and its enjoyment as the man. Through a series of boisterous, bawdy adventures, Tom and the love of his life Sophia eventually find their way to their happy ending. A cast of unforgettable characters, including Tom’s wealthy and fun-loving foster father, Squire Allworthy, the round-heeled Jenny Jones and even bawdier Molly, Tom’s first love, start in Somerset and end in London, leaving indelible memories in their wake.
It’s been my privilege to add back the bits cut from the novel, and reacquaint myself with the wonderful world of Georgian England, free of the hypocrisy of the Victorians. They just wanted to be as honest as they knew how and have as much fun as they could!
TOM JONES is out in January, at least part one is, because this is a chunky book. we're planning four parts, each bringing Tom closer to his goal.
So here’s an excerpt from the beginning of the novel. See if you can tell where Fielding stops and I begin!