Hot for the Holidays with Lily Harlem


Welcome to the Clandestine Classics Hot for the Holidays celebration. Total-E-bound, with great wisdom and savvy, has chosen to "open the bedroom door" on several of the established classics with which we are all familiar. The romance has had a good sprinkle of spice added to it and we hope you enjoy the hot new flavor.

I’ve certainly had fun jazzing up my classic so be sure to leave a comment on this blog post for a chance to win Clandestine Classic, Tarzan of the Apes, on the day of its release – 4th of February 2013 AND a £50 gift voucher to spend at Total-E-Bound!! 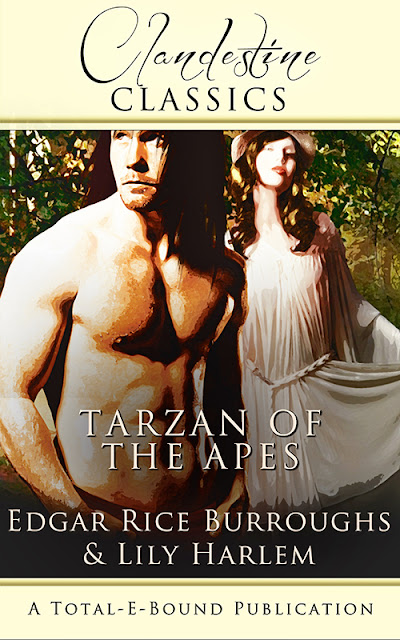 Yes, that’s right, Tarzan of the Apes! Wow, was I excited to get my hands on his hot, nubile body! For years I’ve lusted after him, dreamed of swinging through the trees in his arms, and fantasised about that sexy little loincloth!

So now, get your favorite holiday drink, light the fire, put up your feet and I’ll dish the dirt on all the juicy details.

A wild man with primitive desires, will anyone be able to tame him?

A handsome English aristocrat raised in the jungle by apes, self-sufficient, thriving on danger and with a head full of unanswered questions. Where is he from? Why is he different? What will satisfy the hunger that eats away at the very core of his being and finally feed his appetite for something other than food and shelter?

A delicate American woman, expected to be the best she can be and marry well, but with a craving for adventure and exploration as well as a hope in her heart to find true love with a man who can sweep her off her feet.

When the two very different souls collide, in deepest, darkest Africa, only one thing can happen, and it’s raw and feral. Lust a common language, satisfaction the ultimate goal. But will the gentleman outshine the savage-man? Is virtue to be honoured? And when faced with a civilized decision, can Tarzan do the right thing?

Wow, its hot stuff and the original was just perfect for sexing up! First published in book form in 1914 Edgar Rice Burroughs left some wonderful gaps for me to play with. For example Tarzan grows from boy to man with no mention of sexual urges, but of course in real life this would have been an issue. His body would have gone through many changes and he’d come to want for something he had no name for. Luckily, though, ERB did leave an opportunity for me to slip information to Tarzan in his late teens so he could explore the new feelings and urges he experiences. I did need him to have some idea of what he was doing when it came to the steamy scenes!

ERB also describes Tarzan and Jane stealing their first kiss. He calls Tarzan ‘a hot-blooded man’ which he most certainly is, and I’m sure female readers of the book, way back then, were quite aquiver when they reached this particular page. And need you ask? Yep, I’ve added to it! And then, well, then, Tarzan whisks Jane away into the jungle for an entire night!! 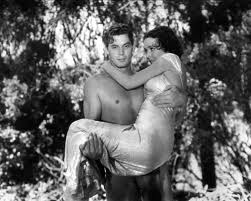 What a treat for a naughty girl like me! I really enjoyed myself here and all those pent-up emotions in my characters were finally released.  Naturally it gets raunchy and rude, Tarzan finally understands the desires that have rumbled within him for so long, and I think, to be honest, he was quite appreciative of the fun I allowed him to have with Jane!

And, Jane, well, she is one lucky lady even if a little prim to begin with. I really enjoyed writing the sections from her view point. She’s feisty and demure, a complex mixture of traits but one that ERB portrays so well. She’s worried about virtue, but is in touch with her sexual side enough to give into some of her needs. She’s also sweet and brave and bless her, pretty damn confused at times too.

I’m not the first and surely not the last to enjoy dreaming about and expanding on Tarzan and Jane’s romance. Over the years the couple have captured the public’s imagination as much as the idea of an infant being raised by apes. In fact in 1918 a silent, black and white movie came out at cinemas called The Romance of Tarzan though sadly no known copies of this film remain. 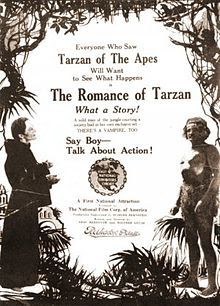 The most famous film made of the book was released in 1932. Johnny Weissmuller, an American Olympic medalist swimmer, played Tarzan in this and then went on to feature in a further eleven Tarzan motion pictures. I think I’ve seen about half of them, but some time ago – that loincloth! 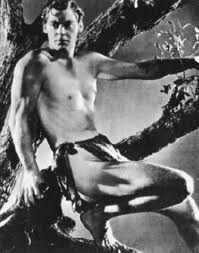 Dozens of other actors have also played the role but Weissmuller is by far the best known. His character's distinctive cry is still often used in films. Mr Harlem, in his usual sense of silly humour, has made the Tarzan yell my ring tone and I’ve been getting some very funny looks when he calls me - which I think he's doing when he knows I'm out and about, just to be a devil! If you’ve forgotten what the yell sounds like, click below.

In 1981 Bo Derek played Jane opposite Miles O’Keeffe in Tarzan, the Ape Man. Bo is beautiful, no matter what role she’s in. I haven’t seen this version, I’m going to add it to my ‘to-do’ list over the holidays. (I like to-do lists like that!) 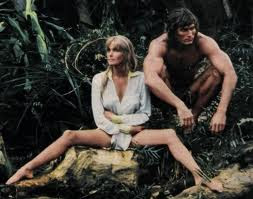 So, going back to the bit I mentioned about Tarzan stealing Jane away into the jungle. Below is an excerpt taken from the Clandestine Classic, Tarzan of the Apes, and picks up just at the point they are settling down for the night in a small clearing in the jungle. Tarzan has made a crude shelter for Jane out of sticks and leaves and intends to keep watch over her the whole night through. It doesn’t quite go to plan… enjoy…

Mmm, I hope that set the scene for you. This waterfall section was great fun to write, there are lots of dynamics going on between Tarzan and Jane and the fact that they can’t communicate in English, but just hand signals and body language, really allows for some great tension between them. Lots of things are unsaid with words, but spoken loud and clear in other ways.

Do leave a comment, along with your email address, tell me what you think it is that's made Tarzan such an appealing hero for so many and for so long. I'll pick a winner at random to receive a copy of Tarzan of the Apes by myself and ERB on the 4th of February 2013 and you could also win that £50 Total-E-Bound voucher - now wouldn't that fill up your e-reader nicely!