Gaston Leroux and the Phantom

I thought I'd add a little bit about Gaston Leroux to the blog. He's a fascinating guy. Everyone thinks of the Phantom when they think of him, but there's more. I am honored to have worked on one of his works, The Phantom of the Opera. But check him out. He's a neat guy.

Here's a little bit from Wikipedia:

Here's a little bit about my collaboration with Leroux, The Phantom of the Opera: 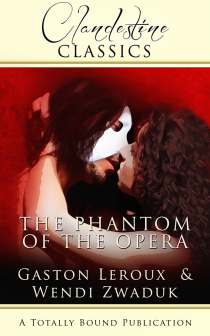 A chance sighting at the Opera, fated love, and three lives in turmoil.
One man pledges to own her, while another wants her heart. The Opera sets the stage for romance and intrigue. In the catacombs below the building lives a man rife with sorrow and passion. The Phantom. But he's not content to live alone. He wants to possess the one woman who can set him free.
His Christine.
Viscount Raoul de Chagny doesn't believe the rumours of a Ghost living below the Opera. He only has eyes for Christine, his childhood friend and first love. Together they embark on a sensual journey of discovery and fiery desire.
But she can only have one man. Will love raise her up or tear their world apart?
Available here!
* * * * *
@Copyright 2012 Wendi Zwaduk and Gaston Leroux

Posted by Wendi Zwaduk and Megan Slayer at 00:00