Was Brom Bones Ruthless - or Just Misunderstood? The Legend of Sleepy Hollow

When I chose Sleepy Hollow as my classic, I picked it because of how much I love the original story. Plus - with a name like Morticia - it was to be expected *grin* I was aware that plenty of other people love it too, and I didn't want to disappoint those that have practically memorized Irving's creative work. Sleepy Hollow is also a very short story - about 12,000 words. Other than Ichabod, we don't get too much information on the other characters - particularly Brom Bones - Ichabod's rival for Katrina's affections.

In the original, Brom is portrayed as a harmless mischief maker. Yet - how harmless is he really if he doesn't have a problem thwacking poor Ichabod on the head with a pumpkin so as to take him out of the running? And since we're left with a mystery as to what really happened to the poor fellow - we don't know if Ichabod was killed (as his worldly effects are left behind) and disposed of by Brom, or if it was merely a prank to scare him off. At the least, physically attacking him with a large object and knocking him off a horse must have caused him some damage.

So when I tackled the expansion of Brom's character for my erotic take on Sleepy Hollow, I had to figure out the answer to that question before I could go any further with my story. Without giving too much away, I decided that because the inference Irving gave was that Brom was a bully, and considered himself top dog with the younger males (the mention of Brom's 'gang'), he probably wouldn't tolerate anyone getting the best of him. It felt to me that since Katrina was considered the female prize of Sleepy Hollow, he would do whatever it took to win her, and that his actual love for her was suspect at best. Ultimately, in my version, Brom is a bit more sinister. And not the brightest thing on two legs. Here's a little snippet when Deidrich - the third in their love triangle, meets Katrina for the first time to ascertain what exactly could have happened to Ichabod: 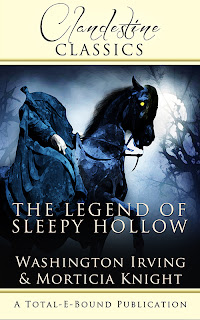 “Tell me, Katrina, what exactly were you told regarding Ichabod’s disappearance?”

“Well, it is quite odd. The very night I found out that Brom was planning on asking for my hand—and had threatened me with disgrace if I didn’t agree—we were having a grand quilting frolic here. Many stories of a sinister nature that are familiar to anyone who has spent time in the Hollow were shared at the party, including one from Brom regarding the Headless Horseman. After the party, and after Ichabod had left me weeping here, it would appear from all accounts that he was stolen by the very horseman Brom had spoken of at the party. When I asked him about that, he wouldn’t give me a clear answer, he just kept reminding me that now there was no reason to refuse him my hand, and that we should be married forthwith.”

“Yes, that is quite the coincidence. Well, I am here to tell you, fair Katrina, that Ichabod did meet up with a horseman that evening, but I am not convinced that it was actually the headless one that you speak of. Tell me all you know about this legend.”

She shared with me every dark and ominous element of the tale, and the more I listened, the more I was convinced that it was Brom or one of his gang who had actually been behind the evil doing. But I needed to be sure.

Katrina looked at me hopefully, a light shining in her beautiful blue eyes that almost threw me off my train of thought. I proceeded to outline the first part of my plan. If it could be ascertained that Brom had indeed been the one to perpetrate the pumpkin-bashing upon Ichabod, then I was sure that I could use my lover’s obsessive knowledge of Cotton Mather’s witchcraft books—and the other superstitious fol-de-rol that he was so fond of—to perpetrate a most wonderful scheme.

I determined that we had tarried far too long in the barn, and that soon the lady Katrina’s new groom would come searching for her, any fatherly considerations being cast aside.

“My dearest Katrina, I need you to get Brom drunk on as much whiskey as you can, and then have him tell you all about the night Ichabod went missing. Do you think you can do that?”

She laughed. “Why, that is no challenge at all. The bigger one would be that he wouldn’t become sodden with drink. I will do as you ask, but what do you hope to discover?”

“That your newly wedded groom was masking himself as the horseman that night. Whether he intended Ichabod lasting harm, or just a good scare, I can’t say. But I will tell you, I did have a fear that Ichabod might never come back to us. Where can I meet you three days hence?”

Katrina looked more troubled than ever. “I’ve always known that he’s an awful brute—but to try and injure someone—or worse—it’s too terrible to conceive! Yes, I will do as you say, and I will meet you at a place in the woods near the old scarecrow.”

Katrina gave me all the details, and we agreed to meet at an early time of the morning, when Brom was usually still in his cups. If she wasn’t there within the hour, then I would try again the next day until we were able to connect. Before I took my leave of her, I took a chance on one thing.

“Sweet lady, there is a favour I wish to ask of you. I would like to taste your delicious mouth so that I can hold on to the dream of future revelry between the three of us. Would you grant me this request?”

She responded by leaning forward and placing her hands on my shoulders. Parting her mouth, she closed her eyes and then moved in closer to me. I was completely mesmerised by her proximity and the promise that her pouty moistened lips offered. Her tiny pink tongue peeked out from between her pearly teeth, and I groaned. Scooping her onto my lap, I crushed my mouth against hers and took possession of her with my tongue. I thrust it inside and let it dance with hers until I felt her go limp in my arms—I presume from the intensity of my kiss.

At last, I pulled away, for I could not allow myself to be tempted into any further action at this juncture. My cock was so hardened and uncomfortable, I doubted my ability to safely exit via the ladder. She sighed in my arms.

“Oh, Diedrich, we must make this plan work. I shall expire from want if I cannot have both you and Ichabod in my bed.”

“Alas, Katrina, I will expire as well. Until three days from now.”

Posted by Morticia Knight at 14:47