A Classic so Clandestine, I Can't Tell You the Title - Guess & Win! 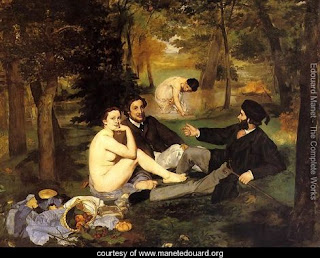 Okay, very soon I will be telling you all about my Clandestine Classic. I know, you're probably thinking, "out with it already!" But I can't, so let's play a game. I will give you some hints, and if you leave a comment below on what your guess is (for those of you who played the Oscars game, it is neither a head nor the ruby slippers), I will send you a pdf copy of my classic when it is released. Yay - prizes! Oh - and please leave your email address, or I will just have to use my psychic powers to let you know you won, and they are sometimes out of service. Like the internet.

First hint: It is set in the 18th Century.

Second hint: It is an MMF menage. Actually, that's not much of a hint, since there is absolutely no mention whatsoever of any type of menage - MMF or otherwise - in the original story. So, I suppose that is a hint in its own way.

Fourth hint: I'll be more fair. It was written by an American author.

Fifth and final hint: The main hero would seem to be an unlikely stud, but in my version he has a hidden advantage that makes the ladies swoon, and the men jealous.

Ooh-la-la. So put your guessing cap on, and leave your answer in the comments below with an email address. See you next month!

(PS - there are absolutely no hints whatsoever in the picture - it's just a very famous painting and fit the theme. Plus, it looks cool. *wink*)
Posted by Morticia Knight at 00:30