Is a Cock a Rooster or a Male Sex Organ? 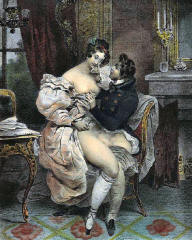 Well…both of course. Except when one uses the term cock and they are referring to a male sex organ, that’s technically a slang term. I love Etymology. I am a horrible amateur, but I love the study of language. When I suggested a favourite classic of mine to TEB for the Clandestine Classics line, I knew if they agreed to have me work on it that there would have to be an intense time period spent studying up on 18th century language usage. And I was absolutely correct.


My concern while writing on my yet-to-be-disclosed classic, was whether the words I used would make sense to the modern reader, not be words that weren’t in existence yet in that era, and finally, to not use words or phrases that were so laughable that it would yank the reader right out of the story. In studying up on sexual slang – I found there were plenty of those! Here are some interesting examples that I culled from the book, Sexual Slang by Alan Richter, Ph.D. and from website sources such as the Online Etymology Dictionary and http://pascalbonenfant.com/18c/cant/body.html , which is specific to 18th Century Slang.


Some classic words for the male sex organ that I vehemently rejected:


On the flip side, as it were, here are some female sex organ terms that were equally horrific, and subsequently rejected:


Yeah. Not sexy. And would no doubt leave the reader scratching their head and saying, “He did what to her who???” I settled on words that are more familiar sounding, and/or, more self-explanatory. Yes, I did use ‘pike staff’, since there was a bit of humour inherent to my particular classic, and in the context of the sentence, would leave no doubt as to what he was referring to. On another note, I was surprised to discover that indeed, the word ‘cock’ as a slang term, has been in use since the 1610’s.


Without a doubt, working on my classic has been an adventure in outdated words and colourful phrases. It made me want to write even more stories from this era – so who knows? There could be more classics or other historical pieces along the way. Also, I always have my fantastic editor, Eleanor Boyall to hold my hand and correct me along the way!


One question for you: Are you a historical snob, and get frustrated when there are little inaccuracies to the period the author is supposed to be writing about (not just necessarily slang for private parts!), or are you more focused on the story and characters and less concerned about the little details, as long as it feels generally consistent with the time period?


See you next month!
Posted by Morticia Knight at 20:56