Hi everyone! Sorry we took a small hiatus there for the month of January, but we're back at it now!

So, how is everyone doing? Good? The new year treating you like it should? I hope so. So far we've gotten off to a rockin' start here at the Clandestine Classics line...and yes, I'm gonna toot my own horn for a second. A Christmas Carol was awarded Best Historical of 2012 by the Love Romances Cafe Readers! Which, even when I try to not wiggle with happy-happys, makes me wiggle anyway. 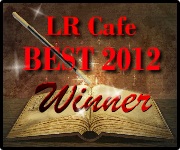 I was talking to an author friend of mine the other day about those awards polls. And she gave me a little eye roll when I said that I was just honored to have been nominated. There are so many fascinating, talented writers out there and I am happy to be counted among them. Why the eye roll, you ask? Well, because I'll tell you a secret, it's a guilty pleasure to actually win one. Every author nominated will swear it's enough to be recognized...but if we win...there is a zinger of a buzz that hangs around for days. And we love that little buzz. To be cheered on by you, our readers, is the highest of praises and no matter the level of writer...well, to be honest, we coo over the emails, the awards, the friend requests by readers who actually know our work and send us a chatty PM to tell us why such-and-such character really, really needs their own story.

In A Christmas Carol, Scrooge's guilty pleasure nearly overwhelms him. Back then, men were shunned, jailed, or murdered for becoming involved with another man. It was a risk - and one worth taking - to find true love, regardless of gender.

It's back to the whole guilty pleasure thing.

So I thought maybe today I could list five of my own guilty pleasures. In no particular order, save number one of course...that one is, well...number one. *wink*

1. Coffee. (Any kind. really. I love coffee. And not even my doctor could get me to relinquish my obsession.)
2. Writing. Naturally.
3. Kudos from fans. (I love the endorphin rush of a personal high-five from a reader.)
4. Reading. Enough said.
5. Camping. Without an internet connection. And I am passing this guilty pleasure on to my children. With  no remorse whatsoever.

These five things keep me sane. And prevent me from murdering the guy at Dunkin' Donuts because he forgot the cream again in my to-go cup.

So, tell me...what things do you do...what is one of your guilty pleasures that sustain you?